Well, wonder no more, because Vocativ mapped the most popular cat names in every state within the United States using data from Veterinary Pet Insurance’s database. You can see the map below.

What follows then is a map of the most popular cat names in every state within the United States: 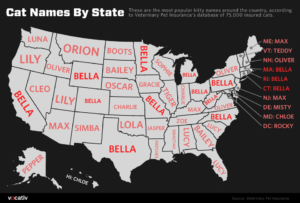 As you can see, the map is dominated by Bella, but Max, Oliver and Lucy are also quite popular. Max and Oliver are both the most popular cat name in four states, Lucy in three. Other names do not appear more than once or twice, but they are just as good if not better. Take Mississippi’s Sebastian for an example, isn’t that just the most perfect cat name you’ve ever heard?

You might also want to read: 10 Things You Probably Did Not Know About Cats

2 thoughts on “A Map Showing the Most Popular Cat Names in the U.S.”