Vegemite on toast makes an excellent breakfast. It’s not only tasty, but also healthy as Vegemite is an excellent source of B-group vitamins. So you might want to share some with your canine friend as well. But can dogs eat Vegemite? And what about Marmite? Is it okay for dogs to have some toast with Marmite?

If you want a short answer, then no, it is not safe for dogs to eat Vegemite or Marmite. While neither Vegemite nor Marmite are toxic to dogs like grapes, chocolate or onions, these yeast spreads do contain high amounts of sodium.

This is a problem, because salt and excessively salty food can cause sodium ion poisoning in dogs, a serious and potentially lethal condition. While one or two teaspoons of Vegemite or Marmite do not contain enough sodium to be life threatening to dogs, it is still a lot more than they should have in a day.

In the case your dog already had a little bit of Vegemite or Marmite, then he or she is likely to be more thirsty than usual and need to pee more frequently as well. This is a completely normal reaction and simply means that your dog’s kidneys are working to get rid of the excess sodium.

What you can do to help is to make sure your pup has plenty of clean drinking water and be understanding of this need to pee more frequently than usual.

Can Dogs Eat Vegemite? Why Vegemite Is Not Ideal for Fido

Unfortunately, you aren’t going to get an enthusiastic “Yes!” here. 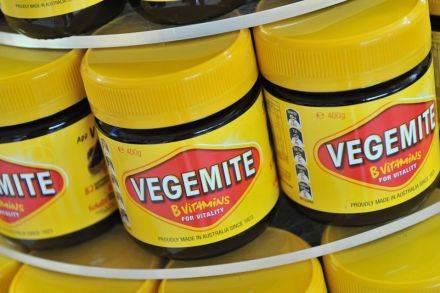 The answer is actually two fold; while dogs can eat Vegemite, as in it won’t kill them right away or cause potential organ failure/blood toxicity like grapes, chocolate or onions, it is still for the best if you do not give your dog any Vegemite.

You’ve probably heard Vegemite is highly nutritious, with plenty of beneficial nutrients (like B vitamins and folate among several others). Where it does offer many things, and is probably great for people as long as they don’t eat enormous quantities of it, Vegemite is incredibly salty.

According to Vegemite.com, as little as 5 grams (one teaspoon) of vegemite contains 165 milligrams of sodium. That already is 65 milligrams more than the recommended daily intake of sodium for medium sized dogs.

If you do not live down under, but somewhere on the British islands, then surely you prefer Marmite to Vegemite.

Marmite is very similar to Vegemite. Just like Vegemite, Marmite is also made out of yeast extract and is packed with B vitmains.

If you are wondering can dogs eat Marmite, then know that the answer is also no. Unfortunately, Marmite is not any better for dogs than Vegemite. Marmite too contains high amounts of sodium.

In fact, Marmite actually contains even more sodium than Vegemite.

Why Is Excessively Salty Food like Vegemite and Marmite Bad for Dogs? 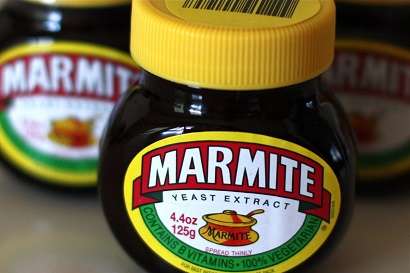 Dog food is carefully designed to give a dog just the right level of sodium and electrolytes his body needs to thrive! Unfortunately, this doesn’t account for all of the extra human food you might be giving your pet.

Human food, along with several dog treats, often add much higher levels of sodium than your pet should have in his diet. That being said, it’s not a good idea to feed your dog large amounts of any kind of salty foods; the restriction isn’t simply limited to Vegemite and Marmite.

In most situations, your dog will simply drink more water if they happen to consume too much salt from something they ate.

However, if your pup ingested extreme amounts of salt, the situation is more serious. The cells in the bodies will begin to release water in order to even out sodium levels. This is bad, because it creates a very dangerous imbalance. This can cause the muscles to react unpredictably due to excess water loss, destruction of brain cells leading to several neurological symptoms (dizziness, headaches, seizures, etc) shaking, jerking, convulsions, coma and even death.

What to Do if Your Dog Consumed Salty Food?

If your dog ends up eating something too salty, you should probably call your veterinarian. They will almost certainly recommend either you provide plenty of water, or you take your pup in so they can provide fluids intravenously.

Can Dogs Eat Vegemite Sandwich or Toast with Marmite?

Because you only add a thin layer or Vegemite or Marmite to toasted bread, surely it must be okay for dogs?

A small amount of either Vegemite or Marmite is not toxic to dogs, but it is still best to avoid giving your dog toast with Vegemite or Marmite. That is because your dog already gets the right amount of sodium from her regular food and excessively salty human food is only going to cause harm. It puts extra stress on the kidneys to rid the body of excess sodium.

Vegemite and Marmite are perfectly healthy for us humans, but they contain a lot of sodium, making them potentially dangerous to dogs.

It is best not to give your dog any Vegemite or Marmite. However, don’t panic if your dog has already consumed a little bit as neither Vegemite nor Marmite are toxic to dogs.

If you still want to treat your dog with something special, you can try feeding her healthy fruits like honeydew. You can also buy some treats specifically made for dogs (considering all their special dietary needs).