Question: Can dogs eat chicken? Or is poultry best kept off your dog’s diet? The short answer would be yes, it’s generally safe for dogs to eat chicken, but not chicken bones. Also, when feeding your dog chicken it’s best to cook the chicken before feeding as raw chicken poses potentially dangerous health risks to our four-legged friends.

It might seem like a perfectly natural thing for your dog to wolf down a chicken bone, but it can actually be dangerous for dogs to eat chicken bones, so it’s best if you would not give your dog any chicken bones.

Most of you already know this, but poultry bones are prone to splintering when crushed (like if your dog bites down on it). This is extremely dangerous, because bone shards can end up lodging in the mouth, esophagus, and stomach, which is extremely painful and can be fatal. Thus, you should never give your dog chicken or turkey bones, especially if they are cooked as cooked bones are even more likely to splinter.

Feeding your dog raw chicken or other raw meats can be dangerous if not done correctly. To be on the safe side, it’s best not to include any raw meats in your dog’s diet.

We all know that bacteria, fungi, and viruses can make us and our dogs terribly, terribly ill. Now, chicken is usually populated by bacteria more than viruses or fungi.
Bacteria enjoy a warm, wet environment, especially when it’s soft. All bacteria also need a source of nutrients, and usually especially need a specific sugar, depending on the microbe. Thus, warm chicken would be near ideal, as it fits all the requirements, save the sugar.
It may seem as though with no “food,” the bacteria would die. Yet, we must remember that these organisms are tough. They can go through the acid-filled stomach to infect the intestines, and then they live there, where there are few spare nutrients.
Some poultry-associated pathogenic bacteria even can go beyond simply trying to get by in the gut. Listeria monocytogenes, for example, invades the gut, then busts its way, so to speak, through the intestinal membrane, which then allows it access to other organs and the bloodstream.
This particularly virulent pathogen can even cross what’s known as the “blood-brain barrier,” allowing it into the spinal/brain fluid, which makes it very easy for the bacterium to attack the meninges, causing meningitis. It can even penetrate the fetus-placenta barrier and infect the fetus.
Some pathogens associated with poultry to be aware of are the following:
There are, of course, safe food-handling practices that can protect you and your pets from these invisible threats.
The most important thing is to never leave meat on the counter for extended periods of time. This happens most often when someone is trying to thaw dinner. The best way to thaw meat is to do so in the fridge, the next best option would be the use the microwave or to put the meat a bowl of cool water, refreshed as necessary to keep the water cold.
The FDA has a very helpful article on safe food handling. Their first recommendation is to make sure you know the symptoms of food-borne illness, so that you can act quickly should you or someone you’re with present symptoms. After that, the FDA lists four very important practices that can greatly reduce your chance of getting a food-borne sickness: clean, separate, cook, and chill.

So you can see, there are plenty of things you can do to make your food safer.
In general, it’s still best not to feed your dog raw chicken, but if you’re cutting up some fresh chicken (like 5 minutes out of fridge), your dog will very likely be fine eating it.
It’s also worth noting that most dogs have a much stronger immune system than we do. They are often sniffing, rolling in, and eating various natural items, plus things like shoes. Their immune system will have antibodies for almost anything they’re going to eat. That being said, you still should exercise caution and use the FDA guidelines above. 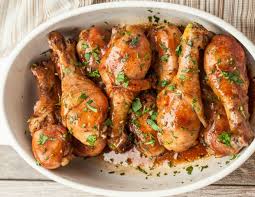 Now, you all must be thinking about safety issues in cooked chicken. As a general rule, cooked chicken can be a safe and delicious treat for dogs.

One would think the problem with cooked meat would be the calorie count, but unless you’re giving your dog an entire piece of chicken, like a roasted or fried breast, it’s not a bad snack.

One thing to keep mind, though, is that dogs should not be fed excessively salty food, so heavily seasoned chicken is not a suitable treat for your pooch.

Because of the excessive calories, it’s also best to keep thing like chicken nuggets off your dog’s menu.

Occasionally giving your doggy a few pieces of plain cooked chicken, however, is safe.

Conclusion on Can Dogs Eat Chicken

What to keep in mind is to NEVER feed your dog poultry bones and be very careful with raw meat – follow the FDA’s safe food handling guidelines for raw chicken. If you want to give your pup cooked chicken, then do that sparingly and avoid heavily seasoned chicken products.