Unfortunately for cats, the answer is no, it’s not recommended to let your cat eat marshmallows. While marshmallows are not exactly toxic to cats, there is more than one reason why you shouldn’t feed them to your cat.

Marshmallows Can Be Harmful to Cats 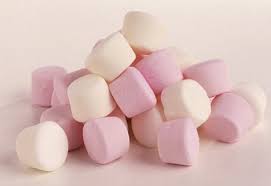 For one, marshmallows are a choking hazard to cats. Marshmallows are not recommended for children under the age of 3, because these sugary treats can squash into the right shape and get stuck in a child’s throat. This could happen to your cat as well. There already are several reported cases of this happening on the Internet. I would not recommend to ever give your cat marshmallows as it could end very badly.

For three, surprisingly, marshmallows also contain quite a lot of sodium. One regular size marshmallow contains 5.8 mg of sodium, which is a lot considering cats’ low sodium tolerance.

As marshmallows are not toxic to felines, many cat owners believe that it’s okay to give their cats a marshmallow every now and then, but it’s not. A marshmallow can pose a choking hazard to your cat. This alone is a good enough reason to not share these confections with him, but marshmallows also contain unhealthy amounts of sugar and sodium. On top of that, cats cannot taste sweets, so your feline friend most likely wouldn’t even like marshmallows.

If you want to reward your cat with a treat, then it’s best to use commercial or home made cat treats, sugary treats meant for us humans can be dangerous to cats.

7 thoughts on “Can Cats Eat Marshmallows?”