The short answer would be no, it’s not okay to feed your cat bacon, ham or other processed meat products like sausages and spam.

The main reason why processed meat products are not safe for cats is that they contain high amounts of salt. Salt is the most common seasoning ingredient, so it might be surprising, but table salt can be severely toxic to cats.

Can Cats Eat Bacon? Not Recommended!

You are having bacon for breakfast and your cat smells it. He likes the smell, so he assumes that he too would like some bacon for breakfast. However, when it comes to human food, cats do not know what’s safe for them and what’s not, so it’s up to us to make sure we don’t feed our beloved felines anything dangerous.

So you wonder: can cats eat bacon? Then answer is no, there’s a number of reasons why cats should not be fed bacon.

For one, bacon is usually cured, which means that it’s very high in sodium. One small slice of cooked bacon usually contains about 137.4 milligrams of sodium, which is almost ten times more than the recommended daily sodium intake for cats. And it’s not like the extra sodium is harmless to cats, cats can tolerate up to 42 milligrams of sodium per day, any more than that and your cat may start to show symptoms of salt poisoning. Salt poisoning is a dangerous condition, which can even lead to the death of your feline friend. 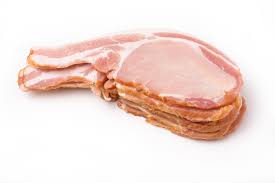 It’s important to remember that you are not doing your cat a kindness by giving in to his food begging and letting him eat some bacon. If you want to be a good cat owner, then don’t allow your cat to eat things that are not good for him.

Ham is another popular processed meat product, especially around holidays like Easter and Christmas. It’s made out of pork, so it might seem like a good idea to share it with your carnivorous pet. However, can cats eat ham? The quick answer would be no, ham is not okay for cats to eat.

Ham is not a lot different from bacon. They both contain a lot of salt. 100 grams of ham contains around 1,200 milligrams of sodium, which is way too much for a cat.

Foods containing a ton of salt are not healthy for us as well. That’s why a lot of health conscious people around the world buy low sodium ham. Low sodium ham would be okay for a cat as an occasional treat, but as even the low sodium hams contain quite a lot of salt for cats, you’d still need to moderate the quantity of ham you give to your feline friend.

Raw bacon or ham is only okay for your cat if it’s truly raw and not cured. However, feeding your cat raw meat has its own dangers, so there are some precautions you need to take. For one, only feed your cat fresh meat. For two, makes sure all the equipment like the knife, cutting board and your cat’s food bowl are clean. It’s also advised to consult with a veterinarian before feeding your cat raw bacon, ham or other raw meat.

Can Cats Eat Sausages and Spam?

Bacon and ham are not the only processed meats we humans like to eat. Different sausages and even spam are also popular all around the world. Surely you wonder whether it would be okay to share these products with your cat? Spam is not a suitable product for cats, it’s extremely high in sodium. Sausages, however, can be okay, it depends on a few things.

As there are thousands of different sausages made around the world, whether a sausage is okay for cat to eat or not, depends on the ingredients of that specific sausage. Some things to check are: the sodium content and whether the sausage contains onion or garlic powders.

If a sausage contains very little salt and no onion or garlic powders, then giving a small piece to your cat is safe. You are, though, better off feeding your cat commercial cat treats and not sausages, because that way you can always be sure that what you give your cat is safe for him.

While a small piece of bacon or ham is not likely to harm your cat, it’s best not to share processed meats with your cat. As salt helps to preserve meat and adds taste, processed meat products like bacon, ham and sausages usually contain a lot of salt. Cats are small animals and cannot tolerate a lot of salt, even a small piece of bacon can offer your cat more salt than it’s okay for cats to consume in a day.