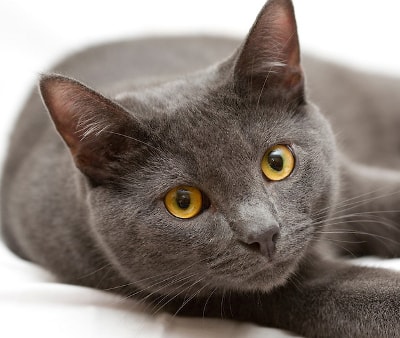 Did you know that there are over 300 different cat breeds in the world? Surely you’ve heard of some: for example, the Persian and the Maine Coon. They are the two most popular cat breeds in the United States, but what else is there in the world of cats? Well, let me introduce you to 12 rare, but stunningly beautiful cat breeds from around the world.

If you are a big cat admirer, then it’s likely that you already know these breeds, but most of you probably have never heard of the following rare cat breeds:

The Chartreux is an intelligent, quiet and friendly cat breed. They are most famous for the fact that they often appear to be smiling. Of course, they are not actually smiling, it just appears as if they are due to the shape of their heads and tapered muzzles. Chartreux cats are also known to love a game of fetch.

Cornish Rex cats have very short hair, so they do not shed a lot and like warm places. These cats are sometimes called Greyhounds of cats, and that not only because of the similarities in looks, but also because Greyhounds and Cornish Rex cats share the same galloping running style.

What makes Egyptian Mau cat breed special is that they are one of the few domestic cat breeds with a naturally spotted fur. Perhaps because of their origin, they dislike cold places even more than most other cat breeds.

The trademarks of this breed are large green eyes and a heart-shaped head.

In the wild, Kurilian Bobtails are reported to be skilled hunters and fishers. And they may look a little wild too, but they still can make intelligent and gentle domestic cats.

Some Manx cats have a small stub for a tail, but the breed is best known for being totally tailless. They too are excellent hunters, which has made Manx the preferred cat breed for ships and farmers who have problems with rodents.

A rare, but highly intelligent cat breed. Nebelung cats form strong relationships with their owners, but keep a distance with strangers.

Peterbald cats can be born bald or with hair. However, because of a hair-losing gene, the ones who are born with hair, are still likely to lose the hair in time. Other than that, Peterbald cats are affectionate and smart felines who get along well with other pets and family members.

The Siberian, also known as the Siberian Forest Cat, is a powerfully built cat with strong hindquarters. Although, the breed is proven to be somewhat hypoallergenic, it’s a relatively rare breed in the Western Hemisphere.

Singapura may be one of the smallest cat breeds in the world, but Singapura cats do have large eyes and ears.

Snowshoe cats have blue eyes and white feet. They are social and intelligent cats who don’t like to be left alone; perhaps because of that, they often learn how to open doors.

Serengeti is a rare cat breed that was created by crossing a Bengal and an Oriental Shorthair. The most distinctive characteristics of this breed is the yellow or gold coat with a pattern of black spots, which makes them look a little like the wild cats of Serengeti. Sometimes, though, Serengetis are born with a solid black coat.

Own one of these rare cat breeds? If yes, then please do use the comment section below to share some details with us.